Venice is a city in Sarasota County, Florida, United States. The city includes what locals call “Venice Island,” a portion of the mainland that is accessed via bridges over the Intracoastal Waterway. The city is located south of Nokomis and north of Englewood. As of the 2010 census, the city had a population of 20,746. It is noted for its large snowbird population and was voted as a top 10 Happiest Seaside Towns by Coastal Living.Venice is part of the North Port–Sarasota–Bradenton metropolitan statistical area.

According to the United States Census Bureau, the city has a total area of 16.6 square miles (43.1 km2), of which 15.3 square miles (39.5 km2) is land and 1.4 square miles (3.5 km2), or 8.19%, is water. The climate of Venice is Humid Subtropical, bordering very closely on a Tropical Savanna climate and features pronounced wet and dry seasons.

Caspersen Beach Park has hiking trails and a rocky beach 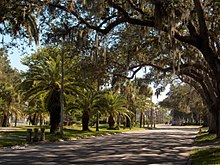 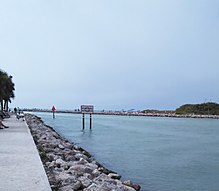 Venice has been listed in several publications as being the “Shark’s Tooth Capital of the World”. It hosts the Shark’s Tooth Festival every year to celebrate the abundance of fossilized shark’s teeth that can be found on its coastal shores.

Museums and other points of interest

The following structures and areas are listed on the National Register of Historic Places: